Employees may register and sign into the employee site using the button below. An invitation code is required for registration. Please contact Leanne Schram for this code. The Bell 204 and 205 are the civil versions of the ubiquitous UH-1 Iroquois single-engine military helicopters. They are type-certificated in the transport category and are used in a wide variety of applications, including crop dusting, cargo lifting, and one of its most common uses, aerial firefighting.

Commonly used for aerial firefighting, heliskiing and heli-seismic Bell designed its Model 204 in response to a 1955 United States Army requirement for a utility helicopter. The 204 was a giant step forward in helicopter design, being one of the first to be powered by a turboshaft. The turboshaft engine radically improved the practicality of the helicopter due to its light weight and high power-to-weight ratio, lower fuel consumption, and lower maintenance and operating costs. The use of a turboshaft in the 204 allowed it to carry a useful payload over respectable ranges and at reasonable speeds, which resulted in the 204 and subsequent 205 becoming the most successful western helicopter series in terms of numbers built.

The civil 204B was first delivered in 1961. The subsequent Model 205A-1 is equivalent to the UH-1H, which, compared to the 204, is longer, larger, and has better performance and a more powerful engine. 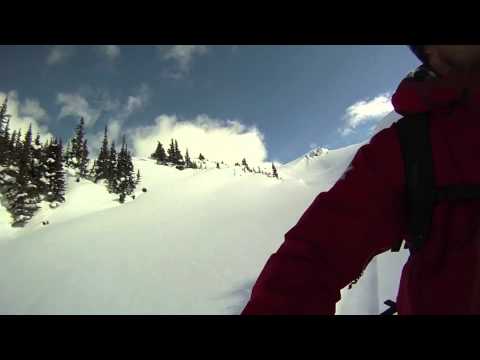 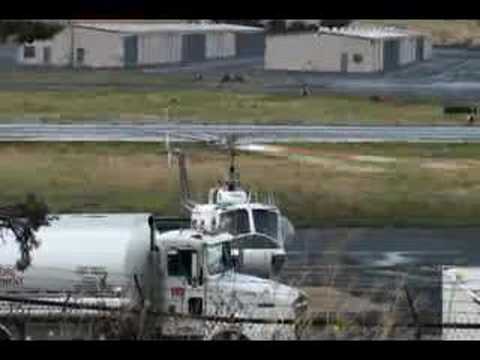 The K-1200 K-MAX “aerial truck” is the world’s first helicopter specifically designed, tested, and certified for repetitive external lift operations and vertical reference flight (Kaman received IFR Certification in 1999), an important feature for external load work. A K-MAX has been used for demolition work by having a wrecking ball as sling load. Other rotorcraft used for these tasks are adapted from general-purpose helicopters, or those intended to primarily carry passengers or internal cargo. The aircraft’s narrow, wedge-shaped profile and bulging side windows gives the pilot a good view of the load looking out either side of the aircraft.

The transmission has a reduction ratio of 24 in three stages, and is designed for infinite life. The rotor blades are built with a wooden spar and fiberglass trailing edge sections. Wood was chosen for its damage tolerance, fatigue resistance and to take advantage of field experience and qualification data amassed from a similar spar on the HH-43 helicopter, built for the U.S. Air Force in the ’50s and ’60s.

The K-MAX relies on the two primary advantages of synchropters over conventional helicopters. The first of these is the most efficient of any rotor-lift technology; the other is the synchropter’s natural tendency to hover. This increases stability, especially for precision work in placing suspended loads. At the same time, the synchropter is more responsive to pilot control inputs, making it possible to easily swing a load thus to scatter seed, chemicals, or water over a larger area.

A K-MAX has been used for demolition work by having a wrecking ball as sling load. 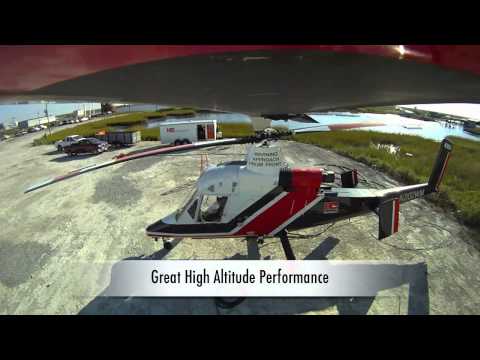 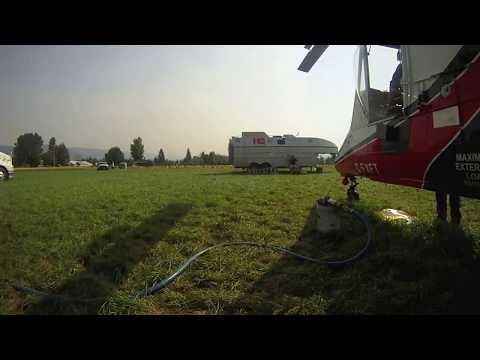 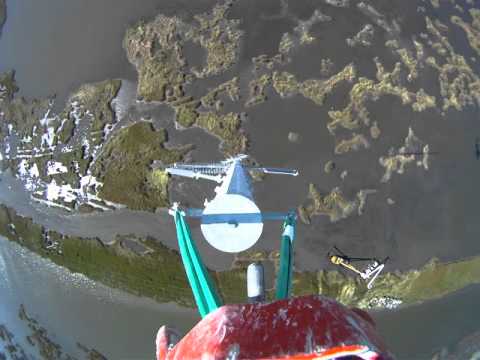 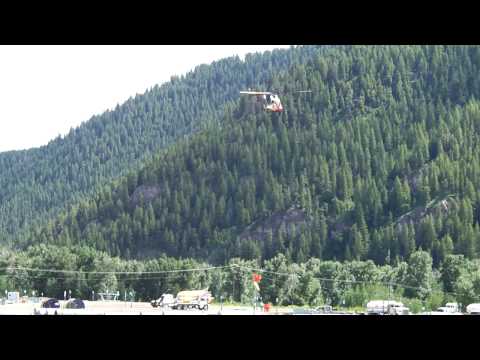